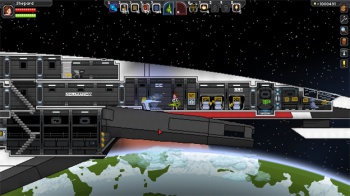 I hear this impressive Starbound conversion is Commander Shepard's favorite mod on the Citadel.

Despite the rage over the ending, the Mass Effect series has undeniably enthralled gaming culture. Look no further than the modders for proof: plenty of games have received Mass Effect-themed overhauls, and Starbound is the latest addition to that trend. Starbound: Mass Effect Edition is slowly adding just about every aspect of BioWare's space opera to the 2D craft-em-up, and shows no signs of stopping.

Starbound: Mass Effect Edition swaps out the game's normal spaceship for a beautifully retro Normandy SR-1. It also introduces a variety of races, complete with unique animations: player characters can be human, Asari, or Turian, with at least one more race in development, though the developers aren't saying which one it is (please be Elcor, please be Elcor). True to Starbound's gameplay, you can also craft new items like N7 armor, upgradable omni-tools, and recognizable weapons like the M-3 Predator, M-6 Carnifex, M-98 Widow, and the Geth Pulse Rifle. Biotics also make an appearance, though right now the only skills available are Lift and Slow.

The mod is still early in development, with plenty of room to grow. The next update will be adding the series' signature Element Zero (though hopefully it will be more fun to mine this time around) and the woefully underappreciated Mako vehicle. If you think Starbound's gameplay needs a little more reach/flexibility, you can find the mod at the Starbound community website. All you need beforehand is a support mod for custom characters, like this one.