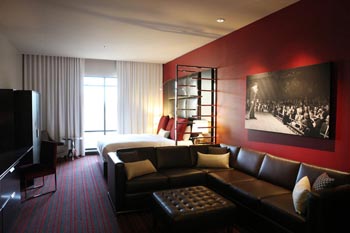 Where else but Las Vegas would you expect bitcoin to be accepted as valid currency?

The land of slot machines, poker games, and expensive vacations may become a home to the increasingly popular digital currency, bitcoin. Two Las Vegas hotels, The Golden Gate and The D Las Vegas, accept payments in bitcoin form. However, this does not apply to the casino floor.

"We need to have greater clarity from the U.S. Treasury, the Department of Justice, the IRS," he said. "Once we have more from our government, we might be able to implement bitcoin for casino gaming, but I think we're still a ways away from that." For now, bitcoin can be used to pay for rooms, meals, and items from the hotels' gift shops.

Bitcoin is moving forward, but it needs policies and approvals from regulators and the government before it will be widely accepted. Stevens said more people ask him if he accepts bitcoin, noting the demand has arrived. If any gambling house were to accept digital currency, you can bet it would be in Las Vegas.