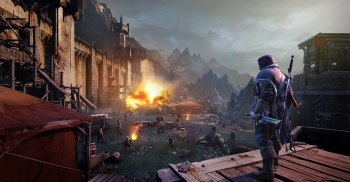 Today's gameplay debut of Middle-Earth: Shadow of Mordor turned a lot of heads, including one former Assassin's Creed developer who thinks it looks awfully familiar.

Judging by today's debut video, the gameplay of Monolith Productions' Middle-Earth: Shadow of Mordor clearly draws a lot of inspiration from the Assassin's Creed series. The eight minutes of pre-alpha footage showed protagonist Talion running, jumping, climbing, and air-assassinating in a manner that's nearly identical to the gameplay of Ubisoft's series. Granted, there's nothing wrong with mimicking a successful game series, especially with Shadow of Mordor's other, more original mechanics - except this might not be mere inspiration. Charles Randall, a former developer at Ubisoft who worked on Assassin's Creed II, claims that Shadow of Mordor is literally using his code.

"Check it out, guys!" Randall joked as he linked the trailer in a tweet. "I apparently made a Middle Earth game!" A few tweets later, it was clear that Randall recognized his own work in Talion's controls. He worked on the combat and air assassinations in Assassin's Creed II, and although the combat looks more like Batman than Assassin's Creed, he's convinced. "Watch the video," he says. "That's AC2 stuff in there. Code/anim for sure."

Seriously, can someone tell me how Assassin's Creed 2 code and assets are in this Middle-Earth: Shadow of Mordor game?— Charles Randall (@charlesrandall) January 23, 2014

Randall admits that he doesn't have legal rights to his work on Assassin's Creed II, since it's all property of Ubisoft, so he can't do anything but "hope [he gets] a special thanks" in the credits. That said, there's been no word from Ubisoft on whether they've licensed their engine to Monolith Productions, or whether it is the same code at all. We'll keep an eye out for official statements from either company.