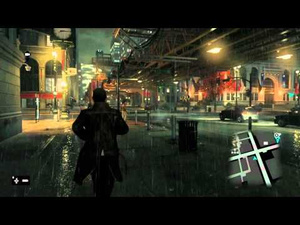 GameStop Italy is apparently telling customers that the Wii U version of Watch_Dogs has been cancelled.

With Nintendo revising its sales projections drastically due to the Wii U under-performing during the holidays, it's safe to say 2014 hasn't been rolling the company's way. Unfortunately, the bad news keep on coming it seems, as the Wii U version of Watch_Dogs might have been canned. According to Italian video game site Wiitalia, GameStop Italy is now telling customers that the Wii U version of Ubisoft's open world action game is no more and to move their pre-order to another game.

To add further veracity to the site's rumor, Wiitalia contacted a few GameStop stores and were told Watch_Dogs is not available for pre-order because it was cancelled by Ubisoft and was not available in the store's database.

Is this a case of GameStop Italy's database giving out erroneous info to people or is this a case of the retailer jumping the gun when it comes to the game's cancellation announcement? In any case, treat this one as a rumor for now and we've reached out to Ubisoft to ask for confirmation and will update the post once they've replied.

In other Nintendo news, an anonymous EA source has claimed Nintendo was "dead" to them after the Wii U launch -- something EA COO Peter Moore has publicly denied.

Update: According to GameStop Italy and a source from Kotaku, cancelled pre-orders for Watch_Dogs on the Wii U were a "glitch in the system," and that the title can now be pre-ordered once more. If so, this means all that doom 'n gloom talk regarding the Wii U is a bit premature, thankfully.