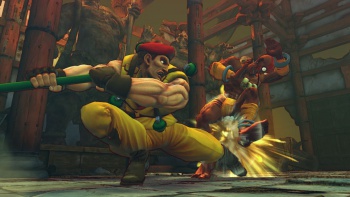 The ability to share your perfect matches/incredible comebacks/terrifying, lopsided defeats with the rest of the world will be just a button press away.

For all you online pugilists out there, Capcom's upcoming Ultra Street Fighter IV will feature the ability to directly upload matches to YouTube when the game releases later this year. The feature's inclusion is a pretty natural fit, given the popularity of Street Fighter IV videos already uploaded to that site.

"You'll be able to select any match from your battle log of online matches, and choose whether to upload it in low or high quality, directly to your own YouTube channel," wrote Capcom's David Hinds on the Capcom Unity blog. "Whether it's the best comeback since Daigo VS Justin Wong, or perhaps you had an encounter with a pro-player you want to share, this feature is great for those who are yet to own a direct capture device, and want to show off their favorite Ultra Street Fighter IV moments!"

And for those of you who not familiar with the famous Daigo vs. Justin Wong Street Fighter match Hinds referred to, you can see it in this video here. You've still got a couple months to perfect it before you upload your own version in June!