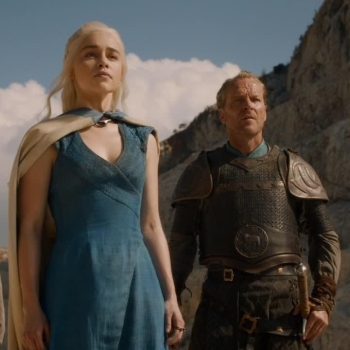 A 15-minute featurette for HBO's Game of Thrones will debut Sunday, February 9.

The fourth season of Game of Thrones is still months away, but fans of the show won't have to wait quite that long to get a glimpse of the new season. On Friday, HBO announced on Twitter that an exclusive 15-minute presentation, Game of Thrones Ice and Fire: A Foreshadowing, will debut February 9. The featurette will offer a look back at the first three seasons of Game of Thrones, and give a preview of what's to come in season four. The presentation will include clips from upcoming episodes, as well as behind-the-scenes-footage and interviews with the cast. Cast members will also answer fan questions. The presentation will air at 8:45 pm ET/PT, before a new episode of HBO's True Detective.

The fourth season of Game of Thrones premieres Sunday, April 6. HBO released the first official trailer for the upcoming season on January 13. The title of the featurette directly references the name of George R.R. Martin's series A Song of Ice and Fire. The HBO adaptation takes its name from the first book of the series, A Game of Thrones. The fourth season will cover the events in the second half of the third book, A Storm of Swords.

Earlier this month, HBO announced that it is collaborating with Sony to bring its HBO GO app to PlayStation 3 and PlayStation 4. No release dates have been set, but the on-demand streaming service will come first to PS3 and later to PS4. The HBO GO app requires that you have a cable subscription to HBO.