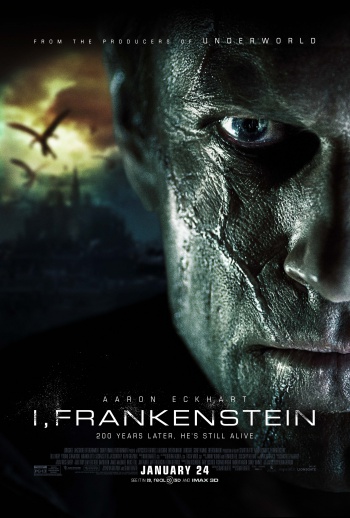 Lionsgate's I, Frankenstein disappoints at the box office where it fails to break $10 million in ticket sales in its debut weekend.

Lionsgate's big budget feature I, Frankenstein failed to sizzle in its debut weekend at the box office managing to only rake in an estimated $8.3 million in ticket sales. The flick, based on the graphic novel by Kevin Grevioux with the same name, has a listed budget of $65 million, which doesn't even include marketing costs and ad campaigns. I, Frankenstein failed to topple Universal's comedy film "Ride Along," which brought in $21.2 million to nestle itself at the top spot once again, and brings the comedy film's total to $75.4 million in just two weeks in theaters.

Listed below are the top ten estimated weekend earners.

9. The Wolf of Wall Street $5 million

The action fantasy adaptation I, Frankenstein stars Aaron Eckhart (The Dark Knight), Bill Nighy (Underworld) and Yvonne Strahvoski (Chuck) and features Frankenstein's Monster (Eckhart) surviving in the present day where he sees himself caught between a centuries-old war between the Demons and the Gargoyles.

If you want to know more how I, Frankenstein fares, make sure you check out our Escape to the Movies video review of the flick where it's called "I, Disappointed."