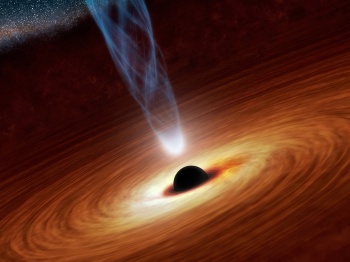 Not as we know them, anyway. Stephen Hawking's latest research into quantum theory may redefine what we know about black holes.

There's a lot we don't know about space - it is the final frontier, after all. But as it turns out, even some of what we thought we knew about space isn't actually correct. Renowned physicist Stephen Hawking, who has already made massive contributions to our understanding of black holes, has published a paper stating that the conventional model of black holes is flawed. His claim hinges on one of the defining aspects of black holes, the event horizon - which according to Hawking, might not exist.

Black holes, as we currently think of them, are surrounded by an event horizon. This radius marks the distance at which the pull of the black hole is so strong that nothing can escape, including light - hence the name, "black hole." However, there is an unsolved mystery regarding event horizons called the firewall paradox: the current models of quantum theory and general relativity don't agree on what should happen once you cross the event horizon.

Hawking proposes a new model that agrees with both quantum theory and general relativity. His idea is that event horizons don't actually exist; instead, there is an "apparent horizon" at roughly (but not exactly) the same distance from the black hole. There's some advanced theory about space-time fluctuations at the heart of it, but the takeaway is that quantum mechanics allows energy and information to escape the pull of a black hole.

"The absence of event horizons means that there are no black holes," Hawking writes, "... in the sense of regimes from which light can't escape to infinity." The idea that information can escape the apparent horizon of a black hole opens the door for a closer study of these cosmic regions, but don't go diving in just yet. Hawking's new theory doesn't answer all the questions, and relies on some unproven assumptions. His new paper, "Information Preservation and Weather Forecasting for Black Holes," has yet to pass peer review.

Of course, even if these things don't behave quite like we thought they did, we'll still call them black holes. "Gray holes" just doesn't have the same ring to it.