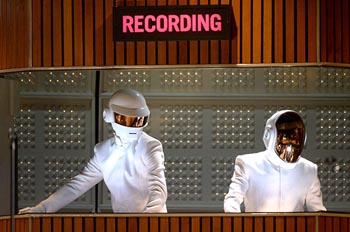 In last night's Grammy Awards, Daft Punk won every category they were nominated in, earned awards for album of the year for Random Access Memories and record of the year with the album's "Get Lucky," featuring Pharrell Williams and Nile Rodgers. Furthermore, they won the best pop duo/group performance award with "Get Lucky" and best dance/electronica album.

Seeing as how Daft Punk does not speak in costume, "Get Lucky" singer Pharrell Williams accepted the award for record of the year and delivered the thank you speech for the performers. "Well, I suppose the robots would like to thank..." he said. "You know, honestly, I bet France is really proud of these guys right now." He also won non-classical producer of the year.

Singer and songwriter Paul Williams accepted the album of the year award. Williams struggled with substance abuse for years before getting sober, and then "two robots asked me to make an album," he said.

Performing "Get Lucky" for the audience, Daft Punk wore their iconic helmets while Pharrell Williams and Nile Rogers performed beside the duo. The song got the audience on its feet, and it included Daft Punk's "Harder, Better, Faster, Stronger," Chic's "Le Freak," and Stevie Wonder's "Another Star." The performance beat Robin Thicke's "Blurred Lines," Pink's "Just Give Me A Reason," and Rihanna's "Stay."

Macklemore and Ryan Lewis also took home four wins, winning best new artist and rap album for The Heist. The pair performed "Same Love" as 33 couples were married on stage, including same-sex couples. Queen Latifah officiated the ceremony. "This song is a love song not for some of us, but for all of us," she said before the performance.