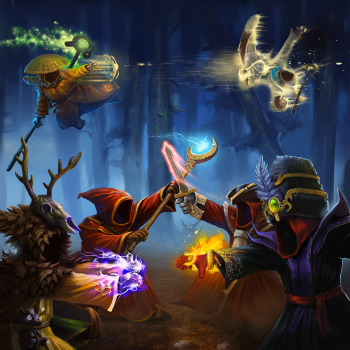 Now you have a reason to blast your friend in the long red robes.

Many a playthrough of Magicka, the quirky action RPG from 2011 that let you combine magic elements on the fly, devolved into the players blasting their teammates and not the enemies. Friendly-fire, and a, shall we say, imprecise combat system led to many impromptu duels. There was some bad blood. Paradox has decided to double-down on that instinct and created a version of Magicka that's competitive PVP, not coop at all. Wizard Wars may take a while to learn, but it's deep combat system lends itself very well to a fighting game.

Wizards in Magicka can use the 8 elements to cast spells. Use fire and a blast of flame shoots from your hands. Pick lightning, and a spark shoots out. There's also an element called shield which, well, creates a barrier to protect you. But where the system gets funky is how you combine elements, and the interplay between them. Combine earth and fire, then click the left mouse button to execute, and a ball of flame shoots out. Use shield and the death element, cast it on yourself with the middle mouse button, and you are immune to those death rays for a brief time. The controls, and the openness of the attacks you can make, take some getting used to, but after twenty minutes the depth of Magicka's combat system becomes clear.

The new Duel Mode which the design team let me play at the Paradox Convention last week is a bit odd. In practice on the arena floor, juggling all these possible combinations results in a tense rock, paper scissors battle of wizards throwing spells at each other, trying to whittle each other's life bar down. And as with any PVP or fighting game, duels can be long strategic chess matches or ended frightfully and frustratingly fast.

In a feature I can't tell is awesome or annoying, the arena battles must have 4 players to join up in order to begin, but only 2 wizards can duel at a time. The other two are forced to stand on a balcony watching the others fight. While I understand the point of the feature - Magicka: Wizards Wars is as fun to watch as it is to play - the forced downtime of waiting for your turn is undeniably frustrating. There is a button you can press on the balcony, which shoots harmless confetti onto the arena floor, but I wished there was something you could do while you wait. Even practicing your spell combo skills would be appreciated, and it might soon make Duel Mode the preferred method of playing the game.

Magicka: Wizards Wars is in Early Access now on Steam, and there is a store in place to let you purchase equipment or abilities to cater to your kind of play. But, in a stroke of genius, and boost you get to a particular stat comes with a negative to another element. To be strong in fire, for example, you must be weak in death magic. This further reinforces the countering and counter-countering of the matches, and will hopefully prevent one particular build or strategy to become too dominant. That's absolutely necessary in fighting game, and the team making Magicka: Wizards Wars seem to have a grasp on that.

"There are no upgrades in Magicka: Wizards Wars," said one of the designers Paradox North, the team heading up the game's production. "Only sidegrades." That concept is just silly enough to make an RPG-cum-fighting game actually work.

Look for the full release of Wizard Wars late this Spring 2014, or jump into Early Access now if you want to have a head start on pulverizing your robed friends.