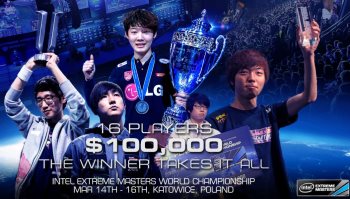 The conclusion of the 8th Intel Extreme Masters elite pro gaming tour will be a $100,000 winner-take-all contest between the best StarCraft II players on the planet.

The conclusion to the latest round of the Intel Extreme Masters tour will be its most extreme yet: An all-or-nothing shootout between 16 of the world's best StarCraft II players, who will earn a shot at the big payday through competitions in Shanghai, New York City, Singapore, Sao Paulo and Cologne. Six players have so far claimed a place at the table:

"Every season the IEM was one of the hardest tournaments to win all year. In 2014 we would like to take it to a new level of extreme. True champions are born when they express their talent in the most extreme situations," ESL Pro Gaming Managing Director Michal Blicharz said. "We wanted to create the most high-pressure tournament this audience has ever seen."

Two qualifying tournaments remain, one in Sao Paulo and one in Cologne, with the top two players from each getting a ticket to the show. The remain six entrants will be chosen through invitations and open qualifiers. The $100,000 prize will be the largest awarded to a single player in the history of the ESL, but what really makes the event worthy of attention is that there is no second place: If you don't win, you go away with nothing. That's extreme!

The Intel Extreme World Championship will take place on March 13 to 16 at the 11,500-capacity Spodek arena in Katowice, Poland.