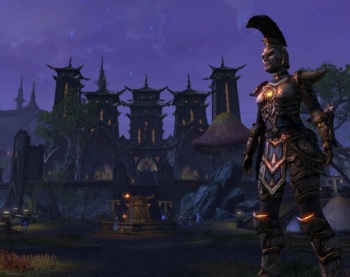 The PlayStation 4 version of The Elder Scrolls Online won't cost any extra to play, but the same can't be said about the Xbox One edition.

PC users have always had it easy: We just pick up the phone, dial the number, place the handset into the acoustic coupler and boom, we're online and free to do whatever we want. Console gamers, on the other hand, have to pay extra for many connected features through subscriptions to services like PlayStation Plus, which costs about $50 a year.

Other bits of note: There will be separate "megaservers" for North America and Europe, PS4 servers will be separate from PC servers and... well, that's about it, really. There are questions about how the game will incorporate an action bar on a console platform, how the touchpad will be incorporated and how much space the game will take up on the hard drive, but those are all dodged with vague, "we're still working on it" responses.

Bethesda confirmed separately that the Xbox One version of The Elder Scrolls Online will require an Xbox Live Gold membership, which also runs about $50 per year.

The Elder Scrolls Online launches on the PC and Mac on April 4 and then later this year for the PlayStation 4 and Xbox One, and will carry a $14.99 monthly subscription fee.