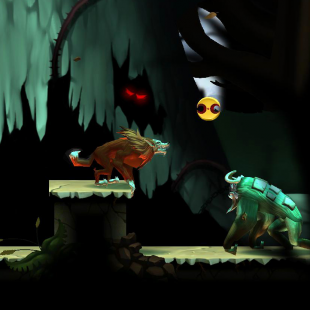 Midnight City will be bringing Avalanche 2 to Steam and Blood of the Werewolf to consoles in 2014.

Earlier this month, Majesco's indie publisher Midnight City unveiled its release roster for the first quarter of 2014. The list, which included games like Krautscape, Double Dragon: Neon and PS3/Xbox 360 editions of Slender: The Arrival were fairly diverse despite their small number. That said, the indie-centric company has now revealed two new games that it also plans to release in the near future.

The titles in question will include a new Steam-enabled version of the platformer Avalanche 2: Super Avalanche, as well as a downloadable console editions of the sidescroller Blood of the Werewolf. Avalanche 2, which drops players into the role of a marshmallow trying to escape its impending doom via rising beverage, will be added on to the publisher's Q1 offerings. Blood of the Werewolf meanwhile is being planned for a simultaneous digital release on Xbox 360 and PS3 sometime in Q2. While Midnight City neglected to include any sort of pricing information for the games, we'll assume for the time being that they'll both adhere to the $9.99 price point the publisher's past titles were announced at.

The real question coming out of this announcement, of course, is what to do you guys think? Personally, I'm probably going to be passing on Avalanche 2. That said, Blood of the Werewolf strikes on a horror/action vibe that I could definitely get into if the game itself is any good. Let us know your thoughts on these games and Midnight City's progress as a dedicated indie publisher in general.