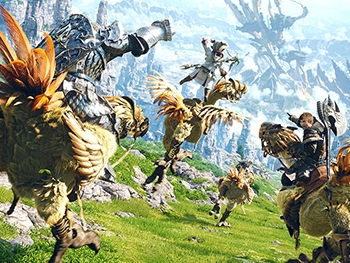 AbleGamers handed out six awards recognizing achievements for accessibility in gaming this year.

The AbleGamers Charity announced their list of the year's best accessibility achievements on Tuesday. This year, AbleGamers has added award categories for media champion, innovator, publisher, and indie game of the year. Final Fantasy XIV: A Realm Reborn took the highest honors, winning AbleGamer's accessible mainstream game of the year award. A Realm Reborn scored 9.1 in AbleGamers' review, which rates the game on its accessibility in terms of mobility, visuals, and hearing.

Naoki Yoshida, producer and director of Final Fantasy XIV: A Realm Reborn, says, "We are very honored to receive AbleGamers' Mainstream Game of the Year Award. In terms of the visual aspect, especially how color is displayed, we took in the players' feedback and continuously performed updates so that any player from around the world can enjoy the game, and are firmly committed to this moving forward. I would like to formally express my gratitude to AbleGamers for recognizing our efforts." AbleGamers believes that with a few minor fixes in upcoming patches, A Realm Reborn could achieve a perfect score of 10.

AbleGamers announced five other awards. Paradox Interactive received the includification award for their work publishing strategy games that meet AbleGamer's game accessibility standards. Paul Nyhart of HDFILMS was recognized for his work raising awareness of gamers with disabilities with the best media champion award. The best innovator award went to SpecialEffect, a UK charity that provides help and advice to individuals with disabilities to help them access video games and other leisure technology. The StinkyBoard received the award for best new device or peripheral, and Galactic Café's The Stanley Parable was awarded best accessible indie game of the year.

The AbleGamers Foundation is a nonprofit charity that provides expert reviews on video games and assistive technology so that gamers with disabilities can make informed purchases. AbleGamers maintains and updates a database of games reviewed for their accessibility. AbleGamers also maintains an accessibility best practices guide for game developers.