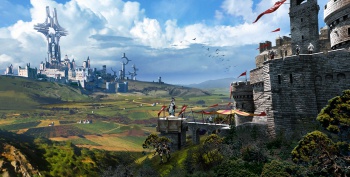 Unsung Story: Tale of the Guardians' team has some beloved talent from Final Fantasy Tactics.

"I am interested in the game concept of Unsung Story and it looks very exciting," Yoshida said in his introduction video. "I made a decision to participate. Please look forward to what I create."

Yoshida frequently collaborated with Matsuno, including work on Final Fantasy Tactics. Yoshida has also worked on other Final Fantasy titles, such as Final Fantasy XII, the 2006 remake of Final Fantasy III, and Final Fantasy: The Four Heroes of Light. Most recently, Yoshida designed the characters in Bravely Default, Square Enix's RPG on the 3DS, which will release in North America Feb. 7 and became available in Europe in December 2013.

Unsung Story is a tactical RPG for PC, Mac, Windows tablets, Linux, iOS, and Android. If it meets stretch goals, it will be available for PS4, 3DS, and Vita as well. Unsung Story looks at how winners write history, leaving many stories unwritten and forgotten, so players will relive hidden tales. The game will be episodic, chronicling a 77-year war.

Should Unsung Story meet its $1,000,000 stretch goal, Final Fantasy Tactics composer Hitoshi Sakimoto will join the team as well. The crowdfunding campaign's base goal is $600,000, of which $436,500 has been pledged so far. The game is expected to release in July 2015.