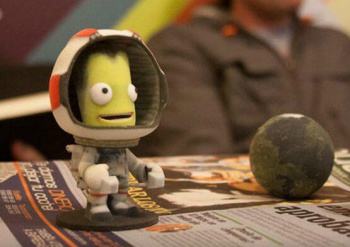 Think you're the master of Kerbal Space Program? NASA has a real-world problem for you to try your hand at.

Anyone who's played Kerbal Space Program can vouch for the difficulty of safely reaching the moon, but don't expect NASA to be impressed - they did that decades ago. So what do the actual aerospace engineers consider a challenge? Asteroids, apparently - and they're opening that challenge to the Kerbal Space Program audience. NASA hopes to put human astronauts on an asteroid by 2025, but the space agency is wondering if gamers can do it first.

Squad, the team behind Kerbal Space Program, has partnered with NASA to develop a pseudo-educational mission pack for the game, inspired by real goals from NASA. And as you might expect, given the source, it's gonna be a tough one. Players will have to design a spacecraft to reach an asteroid, fall into a steady flight path alongside it, then steer the asteroid into a safe orbit around the Kerbal home world (without causing a world-ending collision) before finally landing Kerbals on the planet's new satellite. Easy enough, right?

It's good to see NASA and Squad collaborating - in fact, it's almost surprising that it took this long. Both teams have experience using games to help educate us common folk on the physics behind space travel, after all. NASA recently held a game jam to encourage development of fun, accurate space games, and Squad released an affordable version of Kerbal Space Program specifically for use in schools. Who knows; with the gap between science and gaming growing thinner, games like this very well could be raising the next generation of NASA scientists.