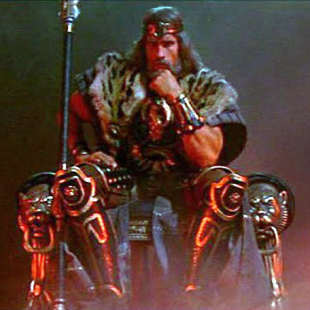 Producer Chris Morgan wants Schwarzenneger to "play his age" in The Legend of Conan.

While Terminator 2 is, bar none, probably my favorite action film, if I had to pick a single Arnold Schwarzenneger movie to name as the actor's best, it would have to be John Milius's Conan the Barbarian. Some would probably laugh at this and I wouldn't necessarily blame them. It's definitely a movie with some silly moments. That said, at its core I'd say still one of the most beautifully shot, fantastically scored and epically satisfying fantasy films ever made.

Suffice it to say, in turn, that I was more than excited to hear back in 2012 that Schwarzenneger would returning to the role The Legend of Conan. That in mind, if producer Chris Morgan (The Fast and the Furious) is to be believed, my anticipation hasn't been misplaced. "It's going to be our Unforgiven," he said. "It's going to be great, like genuinely great." The comparison isn't just about quality, however. The Legend of Conan, much like the 1992 Clint Eastwood film, will chronicle the character of Conan in his latter days as events coerce him to take up the sword one last time. "I want [Arnold] to play his age," said Morgan. "I want [Conan] to be looking at the later years of his life and have to contemplate this horrific threat."

That being the case, The Legend of Conan will flat-out ignore the existence of Conan the Destroyer as well as the failed 2011 Jason Mamoa reboot. The hope, according to Morgan, is "to jump ahead and build on [the] foundation" built by the first, arguably strongest, Conan film. "I think it's going to be something really special and iconic and different than people expect," said Morgan. Whether or not the film will be good however, is arguably less pressing than the issue of exactly when it will hit theaters. A summer 2014 release was originally planned, but with the script still being finished up by writer Andrea Berloff and still no director confirmed for the project, it's pretty clear that the film won't be meeting that deadline.