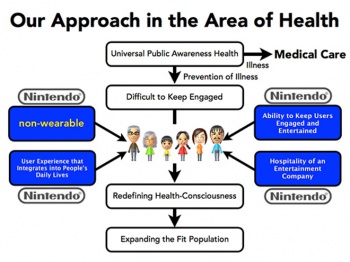 The new Nintendo platform will launch in the fiscal year of 2016, and have a focus on "health and well-being".

Nintendo president Satoru Iwata announced today at an business strategy meeting that the company plans to release a brand-new piece of hardware, dubbed the QOL (Quality-of-life) platform, in the fiscal year ending 2016. The new hardware will be based on non-wearable health monitoring technology.

"What Nintendo will try to achieve in the next 10 years is a platform business that improves people's [quality of life] in enjoyable ways," Iwata said.

As this was a business presentation and not a new product reveal, details are very scarce, and it's not actually known if this will be an entirely new console, or some kind of add-on for its existing Wii U or 3DS platforms. The main theme of the technology is to enhance the quality of life through entertainment. The key word is health, claims Iwata.

"As those who are already suffering from illness can seek medical care, our new business domain would... enable people to monitor their health," Iwata said. "However, what is generally good for health requires some kind of effort to be made by the individual, and... it is sometimes difficult to stay focused and engaged, and it is not uncommon to give up after a few days."

Iwata said that the company will officially announce the platform and provide more details over the coming year. He did say that it was being developed by a completely new and separate division at Nintendo from their Wii U and 3DS divisions, so you probably shouldn't worry about support for those platforms waning.