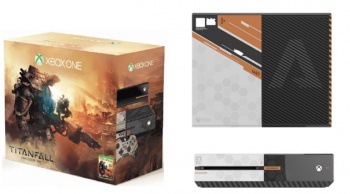 Microsoft is allegedly set to spring a white Xbox One, a disc-free $399 version, another one housing 1TB and a Limited Editon Titanfall console within the year.

While we normally abstain from posting anything that pops up on any forum, NeoGAF user "ntkrnl" has been "verified" by a NeoGAF mod, which means he presented something that made his claims legitimate. The user claims Microsoft is set to release a white version of the Xbox One at retail to coincide with Sunset Overdrive's release this October. If true, this really shouldn't be surprising since the vanilla-colored unit has been made available to Microsoft employees last year. However, what is surprising is that Microsoft's allegedly set to release a disc-less version of the Xbox One at a price point of $399 later this year.

If that wasn't enough, ntkrnl also posted an image of a Limited Edition Titanfall Xbox One console that's set to be announced at a later date. Finally, the forum poster reveals that there's yet another Limited Edition Xbox One set for release this coming November that will include a 1TB hard-drive.

To add further credibility to the rumors, The Verge claims it has "verified" that Microsoft is indeed planning to release a white Xbox One later this year, and can also confirm that Microsoft is presently testing versions of an Xbox One without a Blu-ray disc drive.

When reached for a comment, a Microsoft spokesperson told us, "We do not comment on speculation or rumors."

Are you willing to buy a disc-less Xbox One at a cheaper price? If ever that happens, even a 1TB hard-drive might not be enough to hold your content given the size of games these days.