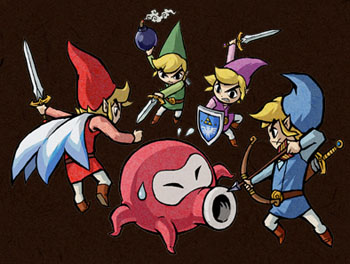 For a limited time, Nintendo is offering free downloads of Legend of Zelda: Four Swords on the 3DS.

3DS owners can get a free download of Legend of Zelda: Four Swords Anniversary Edition from today to the end of Feb. 2, meaning it's time to grab some friends this weekend and work on team-building skills.

Four Swords originally released on the Gameboy Advance with A Link To The Past. Unlike other Zelda games, Four Swords' emphasis is on multiplayer and cooperative play. Getting the full team of four Links proved to be difficult in the days of the Gameboy Advance with game link cables necessary for playing together. Thankfully, today we work wirelessly, but you'll still need . Four Swords can be played in single player mode in Four Swords Anniversary Edition in which the player switches control of two Links, but the greatest part of Four Swords was working out puzzles with friends and siblings.

To download Four Swords Anniversary Edition, scan a QR code to take you directly to the game's page, or you can go to the Nintendo eShop yourself.

The anniversary edition was released for a limited time through Nintendo DSiWare service on Sept. 28, 2011. It includes a new single player mode and more areas. Players both work together and against each other, solving puzzles and fighting monsters together while trying to collect the most rupees.