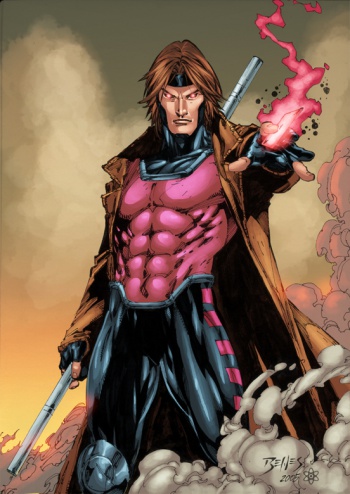 X-Men's ragin' Cajun might get his own standalone movie, with a 21 Jump Street and White House Down star filling the title role.

Speaking personally, I've never quite understood the appeal of Gambit. His entire identity can be summed up as "mysterious Cajun", and outside of an ongoing storyline where he loved Rogue but couldn't touch her, he didn't seem to have much of interest going on. But maybe that's just me. After all, many X-Men fans seem rabidly affectionate for the character, which was the main reason Gambit appeared in X-Men Origins: Wolverine. But X-Men producer Lauren Shuler Donner doesn't want to stop there. She believes that Gambit has enough draw to carry an entire standalone X-Men movie by himself, and is pushing Fox Studios to make Channing Tatum its star.

"I'm dying to do a Gambit movie with Channing Tatum," Shuler Donner said. "That doesn't have to be a great big movie. It's a thief in New Orleans, it's a whole different story. He's on board, and I have to get the studio on board. How can anyone resist Channing? He's such a sweetheart."

Apparently the only person more interested in a Tatum-led Gambit movie is Tatum himself, which he proved at a White House Down press conference last year. "I would like to play Gambit," Tatum explained. "Gambit's my favorite. I'm from New Orleans, around that area. My dad's from New Orleans, and I like to do a Cajun accent. I could do it for real. No knock on Taylor Kitsch, though, 'cause I actually like his Gambit, but I've always lived around Cajun people. Gambit was always like the woman-loving, cigarette-smoking, drinking guy. He was the punk rock of all the superheroes. He's a thief. He kind of rode the line."

Given that the core X-Men movies are quickly reaching critical mass in characters and convoluted plotlines, taking a step back with a small-scale story isn't a bad idea. I'll even admit that Tatum could pull off Gambit in a way that makes for a fun action flick. That being said, assuming Rogue is still with Iceman in this cinematic universe, Gambit's going to need something original to brood over for a full-length feature film.