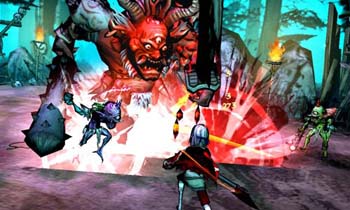 Spicy Horse says Akaneiro: Demon Hunters was plagued by a number of unexpected complications that left it unable to sustain itself while development was completed.

Spicy Horse announced yesterday that the development team on Akaneiro: Demon Hunters has been reduced to just two people, a change necessitated by loss of roughly $1.7 million on the game. That led to questions about how such losses were possible, given that last year's Akaneiro Kickstarter stated that most development was already complete and that the risk that it would fail was "quite low."

Akaneiro hasn't exactly "failed" yet, but neither does it have the co-op multiplayer or tablet editions that were "guaranteed" by the Kickstarter. So how did it suffer such a huge shortfall when the amount of money needed to complete the game was supposed to be so relatively small?

"The idea that $200,000 would finish everything was arrived at under the assumption that Akaneiro would sustain itself. It didn't have to be a runaway success but it needed to cover costs," Kelly Heckman of Spicy Horse explained. "Unfortunately, what we found upon release was some architectural problems (this is why co-op is behind); issues upgrading our GUI - the one we used was compatible with Unity 4.0 but not Unity 4.5, which required redoing the entire GUI; and feedback that told us the game simply wasn't fun. All of this needed to be addressed before we could implement co-op or tablet."

Heckman pointed out that Spicy Horse has delivered all Kickstarter backer rewards, digital and physical, and has been "transparent about this entire process." She also refuted the suggestion that taking the game in its incomplete state to Steam Early Access might have done more harm than good in the long run.

"The game not monetizing has nothing whatsoever to do with Early Access. It has been nothing but a boon to us," she said. "We've earned enough income to get a substantial patch out that puts us in a much better position for the remaining team members to move forward. Had it not been for that, Akaneiro would have remained in the state that it is in indefinitely."

As for when it will come out of that state, Heckman said there's no "calendar schedule" yet but putting one together is the next priority. "We've just pushed out the patch, gathered feedback, downsized the team, and it's Chinese New Year," she said. "Once the team gets back their first job will be to build a calendar that we can share with our backers/community," which for the most part, she added, is standing by the studio.

"Our backers are taking this well; our community on Steam has been supportive," she said. "What more could we ask for?"