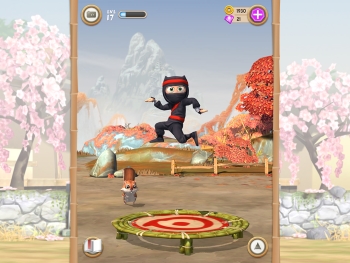 Zynga made two major announcements today, laying off about 15% of its workforce and acquiring Clumsy Ninja publisher NaturalMotion Games in a $527 million dollar deal.

Zynga is letting go of 15% of its staff, cutting about 314 jobs. The cuts are part of the publisher's plans to reduce costs and generate up to $35 million in savings this year. No individual studios will be shut down, and CEO Don Mattrick says most of the cuts will come from "infrastructure" areas. Zynga reshuffled its executives and laid off about 520 people last summer.

Zynga also announced today the acquisition of NaturalMotion Games, a U.K.-based mobile games publisher. The $527 million dollar deal brings 260 employees and NaturalMotion's catalogue of games, including freemium iOS titles CSR Racing and Clumsy Ninja, to Zynga. The move seems like a new direction for Zynga, and may be part of Mattrick's plan for stabilizing the company. Mitch Lasky, former EA executive and colleague of Mattrick, commented on the acquisition in a blog post. "NaturalMotion will provide Don with a fantastic slate of mobile products (both new, innovative ones, as well as sequels of their current hits). Combined with Zynga's reach, social networking expertise, and advanced audience measurement tools, NaturalMotion and Zynga should be a very potent combination."

Zynga was expected to perform dismally in the fourth quarter of 2013, with analysts predicting a loss of 4 cents per share. The FarmVille publisher actually lost 3 cents per share, and that slightly less dismal result prompted a jump in its share price. The social games giant reported $176 million in revenue in the fourth quarter, putting it down 43% from 2012. Zynga also reported a drop in average users, down to 112 million from 298 million at the same time in 2012.