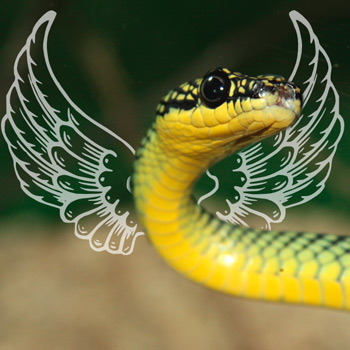 A team of researchers from Virginia Tech has cracked the flying snake's mysterious abilities.

I'm not usually afraid of snakes, but there's one genus living in the rainforests of Southeast Asia that's making me rethink my position. The Chrysopelea, a taxonomic classification which includes five subspecies, is able to leap from the treetops and gracefully float to the ground below. Until recently, the secret of the snake's aerodynamics has remained a mystery, but scientists love a good mystery.

"The snake is definitely not an intuitive glider. When you look at it, you say: 'that thing should not be able to glide.' And in its normal body configuration that is probably true," said Professor Jake Socha from Virginia Tech. "But when it enters the air, when it takes off and jumps and leaps from a branch, it massively transforms its body."

According to Socha, the snake has the ability to rotate its ribs in order to double in width, which creates a kind of scaly airfoil. Then, in order to amplify the aerodynamic effect, the snake wriggles through the air just like that swimming anaconda in the movie Anaconda, starring Ice Cube and Jennifer Lopez.

"It is moving its head from side to side," explains Socha, "it is passing waves down the body and it looks like the animal is swimming in the air."

The Virginia Tech research team thinks that the investigation could lead to more effective robotic designs, which sounds like the most terrifying application ever conceived.