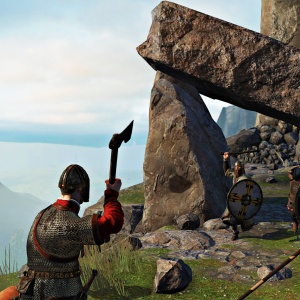 Gordon Van Dyke from Paradox wants to make sure fighting women are well represented in his real-time combat game.

We hear it all the time. Women aren't represented enough in games, especially competitive online ones. There have been some strides this year, the addition of a female model in Call of Duty: Ghosts online play comes to mind, but we still have a long way to go. Gordon Van Dyke is an Executive Producer at Paradox Interactive in charge of the so-called "War" line of games - War of the Roses and the Steam Early Access game War of the Vikings - and he's throwing his gauntlet into the ring of gender representation. Starting with the latest build of War of the Vikings, you'll be able to play as either a female or male warrior along with a slew of other customization options the team is adding.

War of the Vikings is a multiplayer only game which pits warriors against each in medieval combat. You wield axes, swords and bows in real-time action, pitting the Saxon faction against the invading Norse of the time period around 900 A.D. In game terms, there's no difference between the two factions other than cosmetic, and that's what Paradox and developer FatShark are betting on monetizing.

You'll be able to craft the look of your preferred warrior in War of the Vikings based on how much you play. You'll earn currencies for time played, rather than based on skill or wins. That way, everyone stays on the same level playing field, while you'll know characters that look specifically badass likely have invested a lot of energy into the game.

As for the female character models, I was excited to see that their armor didn't have nipples. "We want her to be dressed for battle," Van Dyke said, "Not for Comic Con."

Van Dyke even described how much forethought went into the design of the different female models for each faction, basing the look on historical notions. Vikings traditionally made no distinction between men and women warriors, training whoever had an aptitude for warfare no matter their gender. Therefore, the armor and ornamentation on the female Vikings is very utilitarian. On the other hand, the Saxons were not so lenient about having their women fight among men, so any female warriors were likely rich daughters indulged by their noble fathers. "We based the look of the Saxon females on characters like Arya from Game of Thrones," Van Dyke said.

Another cosmetic addition that enhances the feel of War of the Vikings is in the sound design. In the matches, characters will yell out positional information automatically in a feature called "Battle Chatter", which I found especially helpful in the matches I played. Someone screaming "Archer!" when they get damaged by arrow fire is actually really immersive and fun. Also, I appreciated that when playing the Saxons, Viking characters will yell out battle cries in their native language, rather than English. Van Dyke noted that the Viking characters in the game will not sound like they're from Scotland. A first for the genre, he noted.

War of the Vikings is shaping up to be a delightful diversion for those interested in fast-paced medieval combat. I personally didn't always enjoy the quick deaths I received in the two hours or so I got to play with the different game modes, but there's something really visceral and exciting about dancing around your opponent wielding a huge battleaxe as you try to dance in and deliver a killing thrust with your sword.

War of the Vikings is in the last stages of development, but you can check it out in Early Access on Steam now. It will get its full release on the PC in "early March", according to Van Dyke.