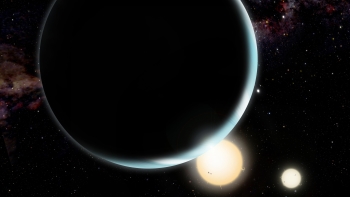 Researchers at the University of Bristol used computer simulations to model how planets form in binary star systems, like the fictional Star Wars planet Tatooine.

The image of two suns high in the sky over Tatooine, baking the desert planet and home of Luke Skywalker, is a familiar one for Star Wars fans. Planets orbiting binary stars, called circumbinary planets, are not just fancies of science fiction. Real circumbinary planets exist, like Kepler-34(AB)b, a Saturn-sized gas giant discovered in 2012 by NASA's Kepler mission. Around a single star, planets form from the coalescing of gas, dust and rocks held in orbit by the star's gravity. In the case of a binary star system, the interacting gravity of the two stars is believed to make planet formation unlikely, due to destructive collisions. Research published this week in Astrophysical Journal Letters offers a possible explanation for circumbinary planets. Using computer simulations, a team of researchers at the University of Bristol has concluded that circumbinary planets form away from the binary stars, and then migrate into orbit.

Dr. Zoe Leinhardt, computational astrophysicist at Bristol's School of Physics, says, "Our simulations show that the circumbinary disk is a hostile environment even for large, gravitationally strong objects. Taking into account data on collisions as well as the physical growth rate of planets, we found that Kepler 34(AB)b would have struggled to grow where we find it now." Dr. Leinhardt and her colleagues used computer simulations to model the effects of gravity and physical collisions of planet-forming matter around binary stars. The models, based on Kepler-34(AB)b, led the researchers to conclude that the circumbinary planet did not form around the stars, and instead moved there later.

The lead author of the study, Stefan Lines, says, "Circumbinary planets have captured the imagination of many science-fiction writers and film-makers - our research shows just how remarkable such planets are. Understanding more about where they form will assist future exoplanet discovery missions in the hunt for earth-like planets in binary star systems." As much as it gets compared to Tattooine, it's unlikely that Kepler-34(AB)b is home to any moisture farmers, since the small gas giant has an estimated surface gravity almost one hundred times that of Earth.

Source: University of Bristol via Forbes.