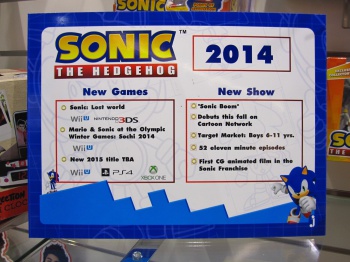 At the Nuremberg toy fair in Germany, Sega revealed that a new Sonic title is in the works for Wii U, PS4, and Xbox One.

Update: It looks like Nuremberg got their facts wrong, Sega has officially come out and denied the existence of a next-gen Sonic title for 2015 on the official Sega forums.

"The recent information coming out of Nuremburg Toy Fair was incorrect. Sega has yet to announce details of upcoming console video games for Sonic the Hedgehog, or further details regarding the new Sonic CG TV series."

Original Story:
A fairly unlikely place to get new game information, but nonetheless, a display at the Nuremberg toy fair in Germany has revealed that a next-generation Sonic title is in the works for Wii U, PS4 and Xbox One, for a 2015 launch date. The display also listed the previously released Sonic: Lost World for the Wii U and 3DS, as well as the upcoming Sonic and Mario at The Winter Olympic Games: Soichi 2014 for the Wii U, as well as a new Sonic TV show: Sonic Boom.

As for Sonic Boom, the new Sonic TV show, it will debut on Cartoon Network this fall, be aimed at boys aged 6-11 years old, consist of 52 11-minute episodes, and will be the first Sonic cartoon presented in CG.

What would you want to see in a next-gen Sonic game? Personally, I'm hoping for the return of werehog Sonic! (just kidding!). We'll have more details about the new game as they become available.