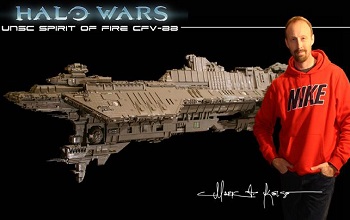 Mark Kelso's LEGO replica of the Spirit of Fire is seven-feet long and took four years to build.

I will confess that I've never been much of a fan of Halo. It's not that I dislike the series, it's more that I've never really felt much motivation to try it. That being the case, it doesn't take a hardcore Halo fan to recognize that Mark Kelso's LEGO brick replica of the UNSC Spirit of Fire is probably one of the coolest LEGO projects ever made.

Kelso just recently completed work on his Spirit of Fire model after four years of work. Four freaking years. The end result is a seven-foot long behemoth that's detailed as all heck and pretty much impossible to not be impressed by. According to Kelso, his model was based on a "heaven-sent" design given to him by one Heikki Anttila and, while he doesn't have an exact count for the project, he knows that it contains "more than six" LEGO bricks. Just eyeballing the thing in pictures I wouldn't be surprised if the count was closer to 600,000.

The real question, of course, is how it must feel to finally complete something of this size and scale after committing yourself to it for so long. "Suffice to say the moment I finally locked the final brick in place... was an accomplishment that I'll never be able to fully put into words," commented Kelso. "For me it was about having the tenacity to keep getting back up, no matter how many times life knocked me down, to see this bloody project through to its completion!" Here's hoping that Kelso has the guts to commit to another project like this so we can marvel at his work all over again a few years down the road.