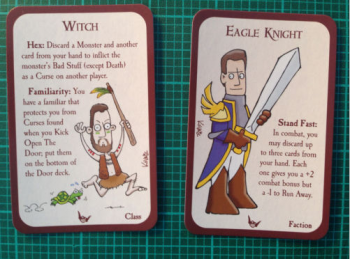 John Kovalic offered the chance to become a Munchkin, and someone paid for a bunch of heifers. And as for Gaiman ...

Patrick Rothfuss' Worldbuilders series of auctions raises a ton of money each year, in an effort to put a dent in world hunger. One of the items up for bid this time was a very special eBay offer from Munchkin Man John Kovalic: a chance to become a Munchkin, with a card dedicated to you. Kovalic's done this twice before - those are the two you see in the image - but promised the winner of this auction that, naturally, their card would be 20% cooler. Coolness comes at a premium, and the winning bid is in: the card sold for $2,151.00.

The card will be released in a Munchkin set, while the winner gets the original artwork, signed by Kovalic, as well as a signed copy of the Munchkin game that contains their card. Worldbuilders has done exceptional business this year; it hoped to raise something like $433,000, and so far is at $637,416 and change. It still has a few hours to go before the conclusion, at 11.59 pm PST February 4th.

Congrats to the lucky winner, and congrats to Rothfuss and Worldbuilders. Here's hoping next year will be even better! Incidentally, if you're having a typical Monday, you might want to head over to YouTube right about now. One of the stretch goals this year was that, if Worldbuilders hit a half mill, Neil Gaiman would read Dr Seuss' Green Eggs and Ham. It did, so he did. Enjoy!