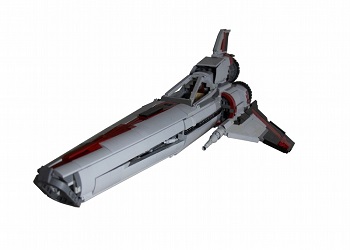 Let's put it out there that neither version of Battlestar Galactica was perfect. Sure the 1978 series could be a lot of fun and the reboot benefited from the greatness that is Edward James Olmos, but they both, at times, were kind of rough. Even with of all the daggits and "final five" junk the series threw around however, both shared a common strength that any fan of space opera can appreciate: cool spaceships making eac other going boom.

Perhaps the coolest of the cool in both Battlestar Galacticas was the Colonial Viper. Immediately recognizable among sci-fi fans, it's arguably more iconic than the titular Galactica itself. And, of course, if there is an beloved spaceship, then a LEGO version must follow. Crafted by builder Garry King, the LEGO-brick Viper looks to be pretty much a spot-on recreation of the fighter as seen in the show.

King's Viper is only the latest in an ongoing series of Galactica ship projects that he's been building as a tribute to the original series. Among his works are the Galactica itself, the classic Cylon base ship and, of course, another model we shared last year based on concept art by the great Ralph McQuarrie. The Viper probably wasn't as much work to finish as those other massive projects, but it's still impressive stuff and we applaud King's commitment to his craft and fandom.