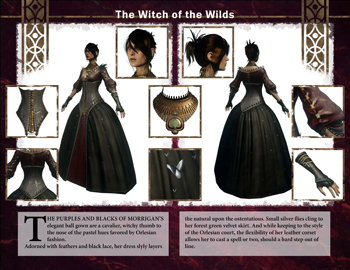 The Morrigan Character Guide is available to download, and it can be printed and folded up into a booklet. It includes the colors of her outfit as well as the intended materials, such as a leather corset and a velvet skirt. Art shows each of her outfit pieces separately for anyone wishing to cosplay Morrigan or draw fanart using the kit as a reference. For anyone who prefers individual images to the compiled booklet version, BioWare also provided links in the post to the separate images of Morrigan. The images show the art for Morrigan's head from various angles, back and front views of her dress and corset, and images of her glove and necklace. Merizan suggests printing the guide on 8.5 x 11 standard letter paper.

Merizan also recommends anyone who uses the resources to share their work with BioWare. The community will also provide additional resources in the kits if there's a demand.

"We want to give fan artists - cosplayers, illustrators, painters, writers, cake decoaters, everyone - access to detailed, descriptive, high resolution character designs before the game is released," Merizan said, noting she cosplayed this costume of Morrigan's last year at PAX Prime.

High resolution images of references are an artist's best friend while working. Fan art also helps build up discussion and curiosity before the game releases, so it's a win for BioWare and and Dragon Age cosplayers everywhere.