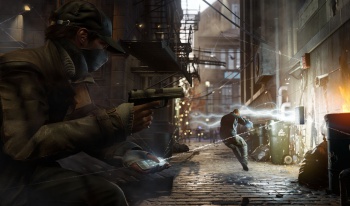 Someone clearly has it in for Ubisoft's Watch Dogs. A notice of express abandonment of the Watch Dogs trademark was filed on February 1st, signed by Yves Guillemot himself. Yet Guillemot denies ever filing that paperwork, and alleges fraud. Ubisoft is petitioning the United States Patent and Trademark Office hoping to prevent abandonment.

At time of writing it's not known who filed the abandonment paperwork, or allegedly forged Guillemot's signature. A document dated February 3rd suggests that the trademark has been abandoned, but if that is what happened it doesn't seem to be Ubisoft's doing.

Ubisoft has also filed paperwork replacing its attorney. The February 3rd document lists Marc Muraccini as its representative, Ubisoft's Senior Trademark Counsel and the man in charge of its trademark portfolio. However Ubisoft has named Joel D. Leviton of Fish & Richardson P.C., Minneapolis, as its attorney, replacing Muraccini.

Source: US Patent and Trademark Office

Update: Ubisoft confirms that the Watch Dogs trademark has been abandoned.

"We are working directly with the USPTO on reinstating the trademark for Watch Dogs and it will be active again in the coming days," says a Ubisoft representative. "The matter has no impact on Watch Dogs' development."

Update: Looks as if the only thing standing between Ubisoft and its trademark is Guillemot's signature.

The response from the USPTO reads:

Ubisoft has 30 days to sort it out, says USPT.

Update: Ubisoft has filed all the necessary paperwork and regained its patent.

Here, the circumstances are extraordinary. An unknown party who lacked authority executed the purported abandonment of the application. Although the request appears to have been sent by petitioner, petitioner declared that it did not submit the request and has every reason to believe that this filing was fraudulent. The Director finds the application should not have been abandoned. Pursuant to supervisory authority provided by 37 C.F.R. §2.146(a)(3), the Director permits the reinstatement of the application."