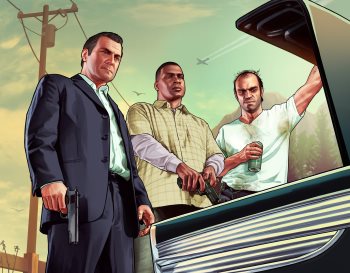 Sam Houser, Dan Houser and Leslie Benzies will be inducted into the Academy of Interactive Arts and Sciences Hall of Fame in a ceremony being held later this week.

You'd be hard-pressed to find a game studio bigger or more famous than Rockstar games, the outfit that gave the world Midnight Club, Manhunt, Red Dead Redemption, Bully, Lemmings (yes, I'm sneaking that one in there) and of course the great Grand Theft Auto. This year the Academy of Interactive Arts and Sciences will recognize Rockstar's contribution to the industry by elevating the three guys at the top to its Hall of Fame.

"Under the direction of these visionaries, Rockstar Games blazed a path for the open world genre, pushing the medium forward and repeatedly raising the bar for game design," the AIAS said in a statement. "Rockstar's commitment to innovation, detail and a deep love of popular culture have spoiled multiple generations of fans with their well-crafted, story-driven and adrenaline-pumping games, always delivered on a grand scale."

Sam and Dan Houser co-founded Rockstar back in 1998 along with Terry Donovan, Jamie King and Gary Foreman, while Benzies, the president of Rockstar North, has headed the development of the Grand Theft Auto franchise since GTA III. The ceremony inducting the trio into the hall will be live-streamed on Twitch on February 6.