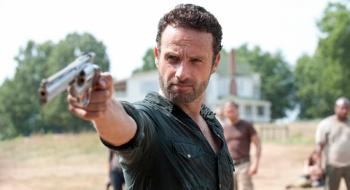 You won't believe who's coming back from the land of the dead in The Walking Dead's mid-season premiere.

A major character will return to AMC's highly-acclaimed The Walking Dead when it returns for its mid-season premiere this week. Given that the character supposedly dies, the reveal is a bit of a shocker. This tidbit was revealed during a TV Guide Q&A session, with the info tucked below. Now, before reading on, the revelation will be a spoiler to most, so proceed at your own risk.

Don't expect to see too many familiar faces since Rick and Carl take center stage when the AMC drama returns. While Rick heals from his beating from The Governor - whom you will see again - Carl will lose something very important to him. (No, not his innocence!)

Yep, The Governor -- played by David Morrissey -- is said to be coming back! Given his predicament the last time we see him, it's unclear whether he's coming back as a walker or possibly in a flashback scene or hallucination. Given executive producer Gale Anne Hurd retweeted this piece by the Examiner, chances are Rick is imagining things once more.

Make sure to watch The Walking Dead's mid-season premier trailer for a sneak peek at what's set to happen once the show's back on air this February 9 on AMC.