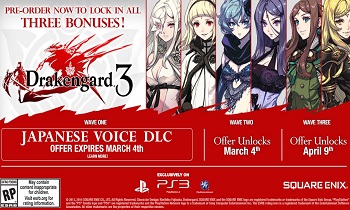 Drakengard 3 will be coming to America and Europe on May 20 and 21st.

Drakengard 3 launched in Japan back in 2013. Much to the chagrin of western JRPG fans however, its publishers at Square Enix have kept fairly mum on exactly when its wider western release would take place. That being the case, gamers hoping to get their claws on the game can rejoice today thanks to a new announcement from the company confirming a May 20th American release date with a European launch following the next day.

Along with the game's release date, Square Enix has also unveiled pre-order options that will reward customers with more bonus content the sooner they purchase the game. For instance, gamers who purchase an advance copy before March 4th will receive three bits of bonus content that include two secret items and Japanese Voice Over DLC. The second and third items will, in turn, be revealed on March 4th and April 9th. Pre-orders made after those dates however, will only receive two and then one of the bonus items.

An additional collector's edition is also being planned that will include a prequel novella, a soundtrack sampler, premium packaging and even more in-game content in addition to the time-sensitive items. Only 5,000 copies of the collector's edition will be produced and it will cost $79.99.

The take away from all of this, of course, is that if you're absolutely sure you're going to want Drakengard 3, you should probably pre-order it soon to get the most for your money. That being the case, we can't help but wonder if Square Enix might be making things just a little too complicated with its rewards. What do you think? Are these time-sensitive pre-orders a good idea or should the publisher have kept things a bit more simple?