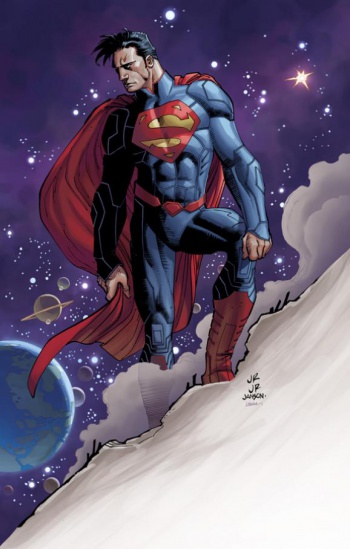 After working almost exclusively for Marvel Comics since the 1970s, John Romita Jr. is leaving to do Superman art for DC Comics.

John Romita Jr.'s name is well known in the world of comic books. Following in his father's footsteps as a comic book artist, Romita quickly became a rising star at Marvel, where he worked almost exclusively from the the 1970s onward. Outside of the occasional creator-owned work like Kick-Ass Romita has been one of Marvel's constants, which makes it all the more surprising that he's switching camps to DC. What exactly would prompt Romita when Marvel is doing so well? In part, it's the chance to work with writer Geoff Johns on Superman, one hero he couldn't work on from the House of Ideas.

"In all honesty, it was a little bit of happenstance," Romita explained. "My contract at Marvel was nearing its end. By hook or by crook, I had been working on creator-owned for quite awhile with Mark Millar on Kick-Ass, and I developed a whole bunch of creator-owned properties myself. So before I actually decided to do this, I had been thinking about going freelance to work on my own creator-owned properties ... As I was ruminating about this, somebody suggested that I have a meeting with [DC Comics publisher Dan Dido]. That's honestly what happened."

Apparently the meeting went very well, leading to Romita taking over Superman art duties alongside writer Geoff Johns. "I had been talking it over with my wife Kathy. My wife had wanted me to try Superman for a long time -- Superman or Batman," Romita continued. I never really paid attention to it, only because I had been under contract. So it was a confluence of events: a really good breakfast with Dan, some accepted ideas, and it built on itself. Plus, I'm still going to have a chance to work on my creator-owned properties at some point during this and after this. So it serves all my purposes."

The upcoming plot of Johns and Romita's Superman book hasn't been disclosed, although some initial sketches have been revealed. Outside of a theme of "The Man of Tomorrow", even Romita isn't sure what direction the series will take. "I didn't have an idea of what I'm going to do now that I have decided, because until I read Geoff's synopsis a couple hours ago, I hadn't considered anything other than a couple of pinup shots," Romita admitted. "To me, it's a little bit more of the Man of the Unknown, because there are some things about Superman that are unknown officially, now, that we will discover. So that part I'm really excited about."

Regardless of how the title turns out, putting a veteran artist like Romita on Superman is an exciting prospect. Having provided artwork for everything from gritty crime stories like Daredevil to large-scale battles in World War Hulk, Romita could produce a very interesting take on the Man of Steel. And that's just Superman; with DC's massive stable of superheroes, there's any number of characters this artist could turn to next.