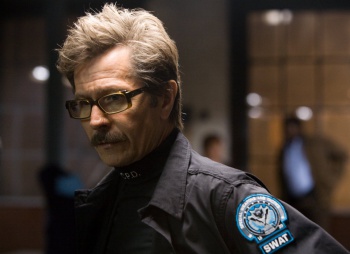 The Dark Knight trilogy's Commissioner Gordon might be making an appearance in the upcoming Star Wars film and confirms, "they've inquired."

Gary Oldman, who played Commissioner Gordon in Christoper Nolan's The Dark Knight trilogy, might be adding the Star Wars sci-fi film series to the list of blockbuster movies he's involved in. Speaking to Sky Movies, Oldman confirms that he has been approached to play an unspecified role in JJ Abrams' upcoming Star Wars Episode VII. "They've called. I'm more cynical about it now. I'll believe it when I'm on the plane home," Oldman states, and adds, "The deal isn't done, but yeah, they've inquired."

This isn't the first time the Oscar-nominated actor has seen his name attached to the sci-fi franchise. Back in 2005, Oldman was asked to voice General Grievous in Episode III: Revenge of the Sith. Unfortunately, due to Revenge of the Sith not being part of the SAG (Screen Actors Guild) union -- to which Oldman is a member of -- he turned it down to show his loyalty.

If this becomes a reality, Oldman will have taken part in not only Nolan's Batman films, but also in other blockbuster franchises such as the Harry Potter film series where he played Sirius Black, and in July 11 later this year, will star in Dawn of the Planet of the Apes, the franchise's eight feature film.

Gary Oldman can next be seen in the RoboCop remake, which hits theaters in North America on February 12.