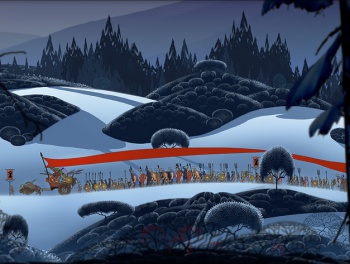 The Banner Saga developer Stoic also had a few things to say about what exactly constitutes a "saga."

Indie strategy game The Banner Saga was a hit with consumers and critics alike, but it also ran into some trouble from King, the maker of Candy Crush Saga, which filed a trademark complaint against Stoic over the use of the word "saga" in the game's title. King hasn't sought damages in the matter but it has attempted to block Stoic's trademark application, putting the future of the game, or at least the title, potentially in doubt.

But in a Facebook post that went up yesterday, the Stoic team said that work on the sequel will begin soon regardless of possible legal complications, and also made a rather pointed comment about sagas.

"Aside from the relief that comes with knowing that we'll be able to keep working at Stoic for a long time to come, what has been really rewarding is the individuals who write to us saying things like 'No game has ever been more worthy of the title Saga. A saga is something epic, something that will linger in the minds and memories of people for years to come. For that is what The Banner Saga is, a little slice of perfection that nobody else can spoil'," the team wrote. "I can't tell you how validating and important that has been to us."

Stoic said that after a "short hiatus," it will get to work on the second game in the trilogy, adding, "If there's one complaint we've heard over and over, it's that the story isn't done."

Despite claiming in its complaint against The Banner Saga that the title is "confusingly and deceptively similar" to its trademarks and likely to cause "confusion in the marketplace," King later acknowledged that it doesn't actually believe Stoic is trying to take advantage of its brand but said the complaint is necessary to preserve its ability to pursue other cases of actual infringement.