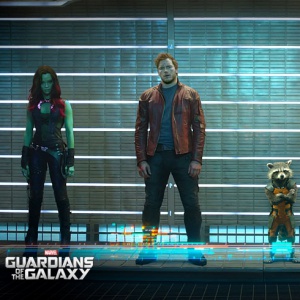 The Guardians of the Galaxy franchise will apparently feature large in the Marvel Cinematic Universe Phase Three.

If a rumor making the rounds today can be trusted, Disney and Marvel are definitely expecting Guardians of the Galaxy to be yet another huge hit in the Marvel Cinematic Universe. Citing "a reliable source," JoBlo claims it has received solid confirmation that the studio has already slotted 2016 for Guardians of the Galaxy 2, possibly in May.

What makes this rumor juicier is that a different source has apparently confirmed an animated series based on Guardians is also a go, and will debut on Disney XD in the fall of 2015.

Centered around the character Star Lord, played by Parks and Recreation's Chris Pratt, Guardians of the Galaxy is going to be a Sci/Fi action film much closer in spirit to something like Star Wars than Iron Man, with only tentative links to the MCU as it has existed to far. Yes, audiences generally eat that stuff up, and footage shown by director James Gunn at Comic Con 2013 received tremendous response from fans. But almost no one outside of dedicated Marvel fanboys have ever heard of the Guardians comic series. If Marvel is already planning a sequel, that says a lot about the studio's faith in the completely untested franchise.

Marvel has consistently hinted that there are plans afoot for Avengers 3, plans widely assumed to involve the villain Thanos and his quest for the Infinity Gauntlet, thanks to his appearance in one of the stingers for 2012's The Avengers. Thor: The Dark World went further, with a stinger that (spoiler) made the Infinity Gauntlet plot official, and tied it directly to Guardians of the Galaxy.

Needless to say, take this with a huge grain of salt until we see if Guardians is a hit or not. We've reached out to Disney for comment, and will update this post with any additional information.

Guardians of the Galaxy is set for release August 1, 2014.