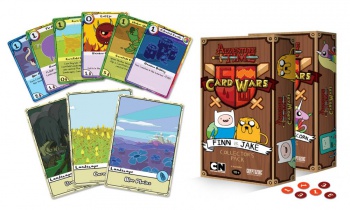 I floop the pig!

For you Adventure Time fans who have been rewatching the episode Card Wars over and over, wondering what it would be like to send Husker Knights and Cool Dogs to fight among the corn fields, Cryptozoic has heard your prayers. Launching on Feb. 19 is the company's new customizable card game, Adventure Time: Card Wars, which will arrive in both physical and digital varieties.

Comparisons to card game king Magic: The Gathering are inevitable, and, according to a write-up on Kotaku, fairly accurate. Each turn, players will be able to spend Action Points on Creatures, Spells or Locations to play from their hand. And, of course, some cards will have unique FLOOP abilities that activate a special power. The player who reduces their opponent's Hit Points to zero is officially declared the Cool Guy of the game.

For people looking for physical cards, two starter boxes will be available at the cost of $20, each containing a pair of decks. One will pit Finn's Blue Plains Deck against Jake's Corn Deck while the other will feature BMO's Useless Swamp Deck against Lady Rainicorn's Sandy Lands Deck.

As for the digital side, developer King Fu Factory will be releasing Adventure Time: Card Wars: The Mobile Game on iOS. The digital game will feature 20 playable characters and craftable cards in addition to features such as tournament battles and a holographic game board. And for you obsessive-compulsive collector types, the physical cards will have redeemable codes for extra digital cards. The mobile game will cost you $3.99, plus other in-app purchases, one of which better be a cup of Dweeb Pop to force the loser to drink.