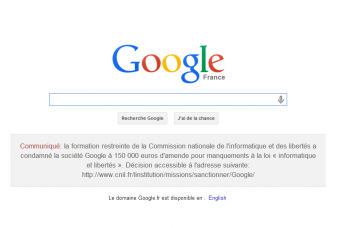 The ordinarily pristine Google search page must now display a notice stating the company had to pay a privacy violation fine of €150,000.

The Google search page is, ordinarily, one of the most pristine places on the internet, displaying the Google logo, a search box, and two buttons. However, in France, at least for the next 48 hours, the Google search page must be accompanied by a notice stating that France's Commission Nationale de l'Informatique et des Libertés (CNIL) determined last year that the company had failed to address privacy and data protection questions, and was subsequently fined €150,000 (around $204,000), the maximum amount allowed by law.

The message must also contain a link to CNIL's decision, which Google is currently trying its best to appeal. "Google has always maintained that page in a virgin state," argued attorney Patrice Spinosi, but nonetheless, France's top administrative court still upheld the CNIL's decision.

Google fell under the ire of CNIL back in October, 2012, when its investigation concluded that a new privacy policy that combined several separate policies under one umbrella and allowed Google to take advantage of user data from multiple different services at once, was in violation of "fundamental rights and freedoms of the data subject."

Google was given a three month deadline to change the policy, which it failed to meet, and as such was subsequently fined and forced to display the message on its homepage. CNIL has been looking for ways to multiply the fairly low fine amount, which will barley leave a dent in Google's massive coffers.

Google is also facing action in the UK, Germany, Italy, and the Netherlands regarding its controversial privacy policies.