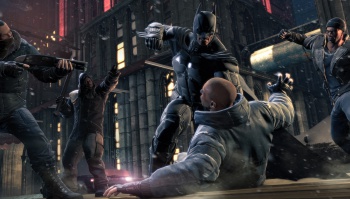 Warner Bros. Montreal has "no plans" to release another patch for Batman: Arkham Origins to fix bugs, since it's hard at work on DLC.

In news that might anger Batman: Arkham Origins players, the studio responsible for the game -- Warner Bros. Montreal -- has said that they have "no plans" to release further patches for the game to fix "minor" issues, but instead, is "working hard" on upcoming DLC. This was revealed by Arkham Origins community manager "Mercury" over on the official forums where the following message was posted:

The team is currently working hard on the upcoming story DLC and there currently are no plans for releasing another patch to address the issues that have been reported on the forums.

If we do move forward with creating a new patch, it will try to address the progression blocking bugs for players, not the minor glitches that do not prevent one from continuing to play. The issues that are not progression blockers will unfortunately no longer be addressed.

We apologize for any inconvenience this has caused for some of you, and want to thank you for having been patient.

So, the studio admits there are bugs, but is working on DLC first and progression-stopping glitches might be tackled at some point in the future -- though we don't know when. However, for those annoyed at some of the game's technical issues that don't impede your progress, good luck coming to gripes with that; but hey, at least you'll have some single-player story DLC in its place.

Should gamers be worried that a studio is blatantly prioritizing DLC instead of first fixing the game that people already paid for? Hopefully, this is an isolated incident and other studios don't follow suit.