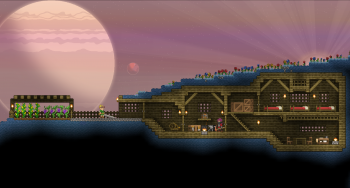 Lead developer Tiy says that a sexual predator has been using the Starbound community to target children.

Starbound lead developer Tiy has posted via Twitter that he is delaying development on the game "to deal with a sexual predator targeting children." Obviously, this is quite a puzzling, and alarming post, and many fans asked for elaboration. Tiy obliged, explaining that "we're working with authorities to deal with someone that's been using the community to target kids," and that the delay would be "Not a big delay, just a day for one developer, for those asking."

Delaying development to deal with a sexual predator targeting children. Just in case anyone is wondering— Tiy (@Tiyuri) February 9, 2014

Starbound's community manager Molly further clarified the situation in a reddit post, stating "The person in question has been permanently banned and we're looking into how to proceed re: involving authorities. To clarify, it's not a serious 'We're delaying the game!' sort of deal, but situations like this do distract from actual game development."

She added that "There are a lot of underage people on our forums. If someone is messaging you in private in a way that's making you uncomfortable (especially in a sexual way), you can always message me or another staff member and we'll look into it and handle it."

Hopefully, the situation gets resolved soon. It's no secret that these sorts of sandbox "build-anything" games like Minecraft and Starbound are becoming increasingly popular with children, and the fact that the majority of players play them on public servers means that it can be easy for predators to get in contact with them.