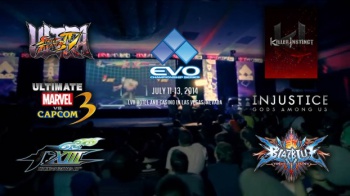 Last year's EVO fighting game tournament saw the surprise addition of Super Smash Bros. Melee, which, despite Nintendo initially trying to block its streams, went on to be the second-most popular game at the event. Shoryuken has now posted the list of games that will feature at this year's EVO, and Melee is noticeably absent. "We still have room in our lineup for Smash, and we're in discussions with Nintendo regarding a possible role for Smash in 2014," posted Shoryuken on its website.

Nintendo itself offered the following official statement regarding the event: "While we are engaged in preliminary discussions with Evo about their upcoming event in July, the potential role of any Nintendo software at this event is undetermined at this time."

Just for the record, the other six games that have been confirmed for the 2014 event are:

As previously announced, all of the games will be played on Xbox 360 instead of PS3, with the exception of Killer Instinct which will presumably be played on Xbox One, and BlazBlue: Chrono Phantasma, which is a PS3 exclusive.

As for Nintendo, while it is easy to chalk this up to just a standard Nintendo jerk move, there may be something else behind the scenes here. Recalling that the upcoming Super Smash Bros. game is due out for Wii U and 3DS this year, what better place to debut it than the world's largest fighting game tournament?

But maybe that's too much to ask from Nintendo, who have historically had something against people who play its games competitively.