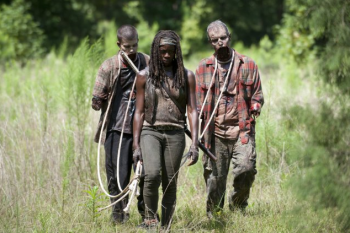 But if you were thinking Walking Dead creator Robert Kirkman was actually going to admit to anything, think again.

Those of you following the Walking Dead TV series as well as Telltale's brilliant point-and-click may have noticed a tiny shout-out to Telltale fans. At one point early in the season, Michonne starts planning a side trip to Macon, Georgia, which Telltale followers will remember is where Lee and his band of cats-in-a-sack survivors hid for most of Season 1. But is there ever going to be a crossover between the TV show and Telltale's story? Maybe, says Walking Dead creator Robert Kirkman.

"That door is always open for us, though whether or not we step through it remains a big question," says Kirkman. "I certainly wouldn't want to spoil anything cool like that if we had it coming up."

Kirkman and TV showrunner Scott Gimple are both huge fans of the game, and Michonne's Macon musings were a deliberate shoutout to Telltale gamers. But if Kirkman is to be believed, it was just a nod to let people know the show's writers are aware of the greater Walking Dead universe, not a hint of things to come. "It's always fun to come up with those little things."

At least the door is open. That's got to be worth something, though whether gamers really want Lee and Clem's story to change is another question again. The TV show certainly doesn't follow the comic's continuity, and were there to be a crossover there's no way it could remain completely faithful to the game's plot. Would it be a problem, maybe even a dealbreaker, for Telltale fans? For now at least, all we can do is speculate.