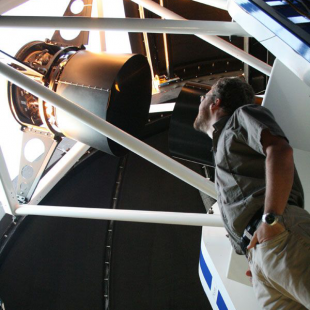 Astronomers from the Australian National University have discovered a 13.7 billion year old "first star" born in the early days of the Big Bang.

The sun is kind of a big deal. Granted, anyone who's ever been able to see should know that, but it can still be easy to forget that in addition to giving us light, warmth and romantic sunsets, it's also a giant, ancient fireball around which everything in our solar system quite literally revolves. That being the case, as far as stars go, our sun isn't really all that old. Granted, 4.6 billion years is a lot to us mere mortals, but on the cosmic scale it's only middle-aged.

That being the case, astronomers have apparently discovered a star that makes our sun look young in comparison. The star in question is 13.7 billion years old and, according to its discoverers at the Australian National University Research School of Astronomy and Astrophysics, is the oldest known star in the universe. The team found the star using ANU's Skymapper telescope at the Siding Spring Observatory. The telescope has a "unique" ability to "find stars with low iron from their color." This comes in handy for stars such as this one which the astronomers believe to be a "first star" originating from the earliest days of the Big Bang itself.

According to Dr. Stefan Keller, the discovery of this ancient star has yielded some new and valuable details about the early formation of the universe. Whereas past theories had surmised that older stars died in massive explosions polluting vast tracts of space, it would now seem that "the primordial star's supernova was of surprisingly low energy" and that the star itself transformed into a black hole that consumed the bulk of its left over materials.