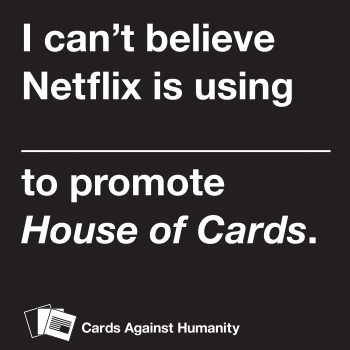 House of Cards' second season is scheduled to hit Netflix in a few short days, which means that fans don't have a lot of time to get their affairs in order before disappearing into a marathon viewing session. And Netflix has managed to make time management even more difficult by teaming up with Cards Against Humanity, the chronically addictive card game.

And in an unnaturally generous gesture, Cards Against Humanity is giving the pack away for free. Sadly, when I attempted to collect my copy (for research purposes, of course), the inventory was sold out. Though, they did supply me with a freebie PDF containing printable versions of the cards.

If you'd like to download your very own copy of the House of Cards Against Humanity pack, the company has setup a special website. And, as a reminder, House of Cards' second season will be released on February 14th.

Source: House of Cards Against Humanity