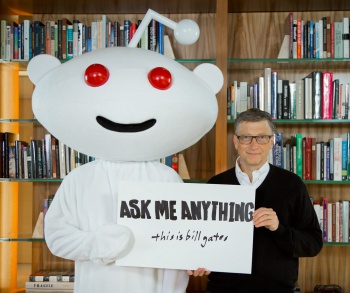 Gates talks about his most expensive guilty pleasure, offers advice to budding computer scientists, and even asks reddit a question of his own.

Its no secret that Microsoft's Bill Gates is an avid redditor, so it should come as no surprise that he has taken to reddit's "I am a" subreddit to tell-all in his second "ask me anything" (AMA) post. Among the questions asked were, what is the billionaire's most expensive guilty pleasure (owning a plane), and what advice can he offer budding computer scientists (look into computers that learn). He also asked reddit a question of his own: "How can we help more people understand that foreign aid isn't 25% or even 10% of the U.S. federal budget, but less than 1%?"

Gates also attached this adorable little animated video to his AMA, answering three of the biggest "Bill Gates myths" that people often ask him. He said that he's not the world's biggest philanthropist - the people who work out in the field and sacrifice everything are - that he would definitely pick up a $100 bill if he saw it lying on the ground (and donate it to his foundation), and uses smallpox eradication as a case study to combat the myth that "aid doesn't work." Here it is below:

Back in the AMA, a couple of other stand-out questions he was asked were "What is different about Bill Gates age 20 years and today, except for the time?" to which he replied 20 years ago I would stay in the office for days at a time and not think twice about it - so I had energy and naivete on my side. Now hopefully I am a bit more mellow but with a little extra wisdom," and "What's one of your goals for the next year... and how can we help?" to which he answered "I wish the debate about education would focus on helping teachers improve and what we know about that. Right now it is caught up in state versus federal and testing versus no-testing. In general politics needs to focus on the problems rather than attacking the other side."

He also said that he is not making any plans to artificially prolong his life, and that if he didn't get into computers, he probably would have gotten into physics.

Update: Bill Gates just posted the following video to reddit, thanking its users for a great AMA. It's too cute not to share! Check it out: