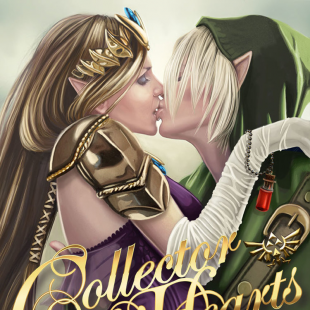 Valentine's Day is approaching fast and, as tends to happen, love is in the air. The coming days will, in turn, see the exchanging of countless flowers, chocolates, cards and other more scandalous gifts that we won't name here. That said, in the world of gaming this most sacred of commercial holidays will likely pass unnoticed. It's not that there's no love in games, of course. It's just that overall it'd be safe to say that most games are more interested in doling out virtual bullets than imaginary affection.

That in mind, the folks at Shutterstock, working with illustrator Echo Chernik, recently took it upon themselves to turn some of gaming's most classic franchise into faux romance novels. While some of the choices (Zelda, Super Mario) are on the more obvious side, a few are a bit more unexpected and take some chances. The Street Fighter cover, for instance, reinterprets the Ryu/Ken dynamic as a full-on romance. The Pac-Man one is also pretty interesting, using the imagery of the game in such a way that it fits the theme while still remaining recognizable.

The only one that didn't quite sit as well with me was the Duck Hunt cover, but that's mostly just because I tend not to think of dogs when I picture cheap romance novels. Regardless, the whole gallery is interesting and, in the least, it's neat to see some of the arguably sidelined romantic elements of games put front and center. Let us know what you think and which games you'd like to see given a similar treatment.