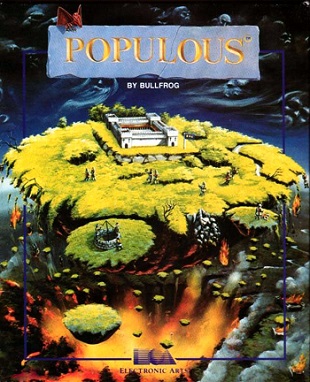 Peter Molyneux's classic god-game Populous can be found at GOG for $5.99

Populous, for me, is one of those classics that I'd heard a lot about over the years but never really knew much about first hand. I'd played and enjoyed some of its "god-game" successors (Black & White 1 and 2) and knew who Peter Molynex was, of course, but the game itself never really caught my attention. That being the case, I now wish it had. While I won't go so far as to say that it's perfect, Populous manages to convert its themes of omnipotent warfare into tangible RTS mechanics that are both clever and extremely addictive.

At the very center of its concept, of course, is the idea that you, the player, are a bona fide deity. We're not talking the peace, love, and be-good -to your-neighbor sort either. Nope, you come packaged with all sorts of nasty powers including earthquakes, floods, mountains, and even an-honest-to-god (nyuck nyuck) Armageddon spell that you can use to trigger a final confrontation between the forces of good (your followers) and evil (everyone else).

As impressive as these powers may sound however, they'll generally play second fiddle to your godly skills as a large-scale landscaper. For your followers to make the most of each world you land in, they'll need you to push down mountains, fill in the seas, and otherwise just give them some nice flat terrain that they can live and build on. It's not just enough that your followers expand, though. Their growth needs to be handed intelligently, in no small part because you're not alone. In each map, you'll share the land with a group of outsiders who foolishly worship another god controlled by the AI. The point of the game, in turn, is to conquer said heretics before they grow strong enough to put your followers to the sword.

In some levels this is relatively easy. The AI will give you all the time in the world to let your people build up gradually until you have yourself a massive continent filled to the brim with believers to power your magic and fight in your name. These mellow maps are a lot of fun, but they're also not the meat of the game. The real competition comes from the levels where the AI god puts up more of a fight, hitting you with spells and moving swiftly to invade your lands and burn your believers to the ground.

The only way to really counter opponents like these is to adopt an aggressive stance of your own. Even when you go the route of swift force, however, Populous doesn't feel like your typical strategy title. While you can exert some limited direct command over your followers, you'll mostly just set them to a particular mood (kill all baddies) and then leave them to their own devices while you continue molding and shaping the landscape to manipulate the battle in your favor. In my eyes I was more like a commander watching from afar, directing my spells like artillery and guiding my soldiers with general directives rather than direct orders. It's a take on combat that perhaps sound disconnected but, in reality, manages to keep you pretty busy, and by extension, entertained . Even if your followers are more or less autonomous, you'll never run out of things to do. There's always some spell to cast, damaged land to repair or borders to expand. Even as battle rages, you'll keep cultivating your civilization, raising new followers to keep your powers and numbers strong. Put shortly, it's a danged good time.

Which isn't to say its combat isn't without issues. While the game will keep you busy, you'll generally wind up doing a lot of the same things over and over again. Granted, this isn't necessarily a problem if you're someone with a tolerance for repetition. That said, if you like challenges with a variety of solutions, Populous may turn you off. Now, I should point out that I didn't beat every level in the game (there's 500 of them for heaven's sake). That in mind, it's very much possible that a few hundred levels down the road I might have encountered something new that wasn't in the earlier maps I played through. The fraction that I did finish, however, were, by-and-large, won by my repeating largely the same tactics over and over again. This is made all the more grindy by the fact that some maps can take an overly long time to beat. There just generally comes a point in most levels where it's clear that you're going to win. The fact that I'd often wind up stuck playing for another 10 to 15 minutes to seal the deal (aka: collect enough mana to cast Armageddon) was a regular annoyance.

The user-interface was also an occasional point of frustration for me. Now, to be fair, at first glance I loved it. The way it presents levels as pages in a book fits its theme perfectly and really helps to sell the idea of the player being a god looking down on the world below. Nifty looking as it is, though, it wastes a ton of space. Some might disagree, but I just generally prefer it when a game devotes as least half the screen to the actual gameplay.

Whatever complaints I might have about Populous, however, are overshadowed by the excellent time I had with it as a whole. While the UI is perhaps a bit indulgent and there are moments where I wished things would hurry along a bit faster, the game overall is a fast-paced batch of fun that still holds up really well today. Yes, you will spend an inordinate amount of time essentially just clicking on empty spaces to make dirt appear. That said, there's a joy to the game that very much supersedes the outer simplicity of its mechanics. Maybe you won't get lost in it the way I did. That said, for GOG's $5.99 asking price, you won't lose much by trying.

Come back next week from Marshall Lemon's review of Anachronox.